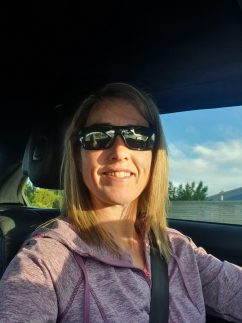 Amy Joined the Royal New Zealand Navy in 1999 as a medic.. Served as a medic until around 2018 when she moved across to work within the Military Police Unit at the Service Corrective Establishment in a Rehabilitation Role.
During her Medic career, Amy reached the rank of Chief Petty Officer and served on several of her majesty’s ships.. One memorable deployment was on HMNZS Te Mana in 2003 to assist the Americans in their taskings to protect the Arabian Gulf from pirate vessels and counter terrorise, after the 911 attacks. This was an amazing 6 month deployment Where no day was the same. In 2002 Amy saw her first deployment as a field medic with an Army led contingent to Bougainville. This was followed by another 6 month Army led deployment to Afghanistan in 2004. End of 2004, was the devastating Bandi Aceh Tsunami which killed over 200,000 people and Amy deployed in the medical role again to help with Operation Sumatra Assist. That deployment left some life altering memories with her, but to date was Amy’s most important medical deployment.
What seemed like a minor fall In Afghanistan, over time left her with some worsening disability in her hip and back and resulted in a total hip joint replacement at age 33 and chronic back pain. These injuries opened a door for participation in the inaugural Invictus Games (international military sports competition) in 2014, and then 2016. These games changed Amy’s life and the focus of her career. Amy loved how the mindset was pushed beyond physical or mental injuries to still find a goal to succeed in, and this is now how she lives her life.. 2018, presented Amy with an opportunity to help plan and run an event here in NZ for a charity from the UK which uses extreme adventures and events, to push their injured veterans and front line emergency services beyond their own known ability in their injured capacity.. this event was to cycle the length of NZ over 2500km in under 19 days.. Amy formed a small team of injured veterans and they became the Kiwi team cycling alongside 2 British teams and a Canadian team.. All from the charity called the Pilgrim Bandits. On completion of this epic endurance event, Amy was offered an invitation to start Pilgrim Bandits in New Zealand. An opportunity which scared and excited her all in one go. This opportunity was a chance for our NZ injured veterans and emergency services to use extreme adventures to come together and participate in international and national events led by either the PB NZ charity or the UK one. Something not seen yet in New Zealand in this capacity. The PBNZ charity was set up in 2019 with the help and support from Mark Appleton and Terraine Hollis and the rest, so thy say .. is history.